By Randy Abraham II Date 07-12-2008 19:46
If any one has an extra or have retired the ole hood and  would like to sell the original American Optical gold mirrored/blue lens, please let me know I will pay you a handsome price immediately for one of these in the 11 or 12 shade. My email is buckbaitor@yahoo.com

Date 07-12-2008 23:21
OK ive had enough of this. There is no reason good enough for an American company, out to make a profit to Not be making this product that so many people are so desperate for. American Optical's Phone number is 508 765 7085. Call them up and say " Id like to speak to your manager". When you get the manager on the phone say  "hello manager id like to speak to your manager". Do this about 5 times and you might get ahold of somebody that knows something about WTF is going on with these lenses and why they aren't making them anymore. If enough welders express their interest  to the right people in that company something is bound to happen. Maybe they will never make those lenses again for whatever reason. But at least we will know why. And maybe  just maybe they can sell the recipe to another company that does want to make a killing. Tell them you would pay 70 bucks a lens! Tell them that dudes are selling the old ones for 300 bucks a piece! Also . Don't let this thread die.  Make this the biggest thread on the website. Everybody share your opinion  keep it goin and tell those AO managers and managers of other companies like JW harris, Radnor, anchor brand (which already has bluish lenses) and praxair  to check out this website if they want to see for themselves how much money they can make.  All it takes is convincing one person in one of those companies , it has to be the right person but just one person. Ive seen internet communities do things like this before. Washingtonflyfishing.com got the army corps of engineers in trouble for driving a freakin bulldozer in a stream bed.  IT CAN BE DONE NOW DO IT!

Date 07-13-2008 00:15
I know a few guys like that, sitting on city blocks of machines, having three dozen of what you want, but won't budge on anything unless they see top inflated retail dollar. No bargaining, no trading, no nothing. That just means they'll die & someone will auction their crap off & give it away. Isn't doing them any good lying around rotting. Just means someone thinks that's their security. It's only junk. Nothing more. They'll bulldoze it all away when they're gone! S.W.

By Randy Abraham II Date 07-13-2008 00:56
Hey I checked out the lens you had stated on ebay and those are not the original American Optical lens. I might get one of those to try, but they are 10 shade and I weld a lot of mig flux core. I usually weld w/ 12s do u think this would work????

Date 07-13-2008 01:58
Hi. You responded to my post instead of Elliot's. Not a biggie. :-) I was thinking the same, that they weren't the original thing. I don't know if there is a difference. Were the original ones glass or plastic?? I was going to give one a shot, but don't want to drop the dough for something that's not the real deal. Usually the old stock ones fetch $300 easy. Any info would be helpful. I have never used one, but heard that they are the cat's a**. S.W.

By Randy Abraham II Date 07-13-2008 04:12 Edited 07-13-2008 04:17
The cool blue lens was a lens that was glass with a mirrored gold on the front and black or dark blue on the back side. When you welded with them you would see the prettiest view of blue instead of the hazy dark green you have now days. You see your welds so clear!!!! There is nothing that I have tried that is like it. My co workers have been having theirs for years because they took a lot better care of them than I did and they are fantastic I never thought it would be so hard to get my hands on one. I have been using an auto Speedglas its ok but I would throw it away to get a original cool blue!!!!

Date 07-13-2008 04:13
I'd like to try one of these out a guy at work has I think the AO safty cool blue and it was nice but my green one with a gold mirror I think it is just as good so I don't know I may have to try his blue lense again and see

Date 07-13-2008 06:14
I have a shade 9 "Noviweld" Lens made by american optical co, its not a cool blue, its orange but it is extremely clear. it is in perfect condition but you can tell it is really old because of the brown paper envelope its in. Has anybody ever used one of these before?

Date 07-13-2008 19:12
I borrowed a cool blue that a hand had. I will always be seeking that lense, just because of a single rod burnt while looking through it. I say they are everything they are cracked up to be. I understand the price now.
I read on a similar thread that the chemical used to make them blew up in the plant once, so they gave it up. Dont know for sure if it did so spontaneously or what.
I would buy this lens without question. SWEET!

By tigmaster Date 01-06-2009 22:05
Hello I have a true blue made by american optical it's a #10. I am only selling it and I hate to but I need to gather up enough money to purchase a sa 200 welding machine so this is a huge sacrafice to let this near perfect condition lens. only serious need apply I can be reached by cell at 504-915-5810 or email mphernandez33@yahoo.com will send pictures if needed. 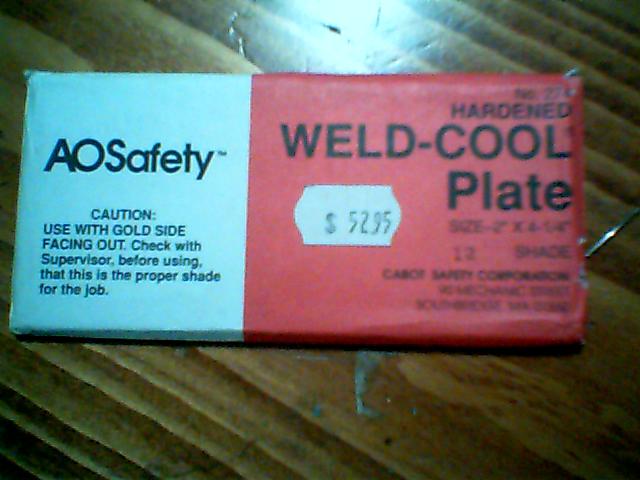 By 808weldah Date 02-28-2019 05:58
Aloha,
I have been searching for an AO cool blue lens and haven’t had much luck. If anyone knows of someone selling one please send me a message. Mahalo