Date 02-10-2011 14:58
our procedure defines weld pass as a weld bead extending the entire length of a longitudinal weld. The result of a pass is a weld bead and may include several stops and starts.

the procedure definition for interpass temperature as the maximum temperature of a section of the deposited weld metal and adjacent base material immmedialtey prior to welding again in that section for multipass welds.

The location for taking this temperature states 1" from the weld.

However, many of the welder take the deffintion of weld pass and interpret it to read that the temperature should only be taken between weld layers and only at those points. ie prior to root, prior to each intermediate layer and prior to final cover layer.

I believe it means that at no point shall the assembly be above this temperature.

Date 02-11-2011 14:02 Edited 02-11-2011 14:06
You have to understand what it is you are trying to accomplish with interpass. It does not damage the material by going over interpass. The welding process itself goes over interpass. The HAZ is over interpass. The idea is generally to increase cooling rate to minimize the amount of time above a certain temperature, or in the case of say P91 allow it cool back down to below martensitic start temperature for transformation. In the case of P91 you just want the bead to be transformed so you can temper it.
Take for example using a chart recorder and requiring constant monitiring. If you have your thermocouples placed an inch from the weld and you are imposing a 350 degree interpass, you better stop long before 350deg because conduction is gonna continue after you have cut off the arc. And if you insist on your interpretation your gonna have some explaining to do becasue you violated your interpass as you understand it. So in essence your 350deg interpass becomes much less. And you end up having to guess at where to stop and have to stop much more often which does the material little good.
You run a pass and check the temp. A layer and a pass are only the same when a single pass completes a whole layer of weld metal. If its wide bevel it may take two or three passes to complete a layer.
Now, if you want to impose such a regime as you understand it you are certainly welcome to do so, but it is NOT the intent of the code and is counterproductive.
One other point, as stated the welding process itself violates interpass temp. Thats what welding is. So if you insist upon your interpretation o finterpass then it becomes and issue of how far away you monitor your IP. If you are going to do it the way you imply I would suggest as far as posssible from the weld.

Date 02-10-2011 19:49
The discrepency is the diffenition of weld pass among the welders.  Does the weld have to go 360 degrees around a pipe or 100% across the a plate before it is considered a pass or can a segment be considered a pass.

attached a photo numbered one through six.  Number 1 is a bead that is 100% across the length of the plate while the others are not. Are the others still considered passes? 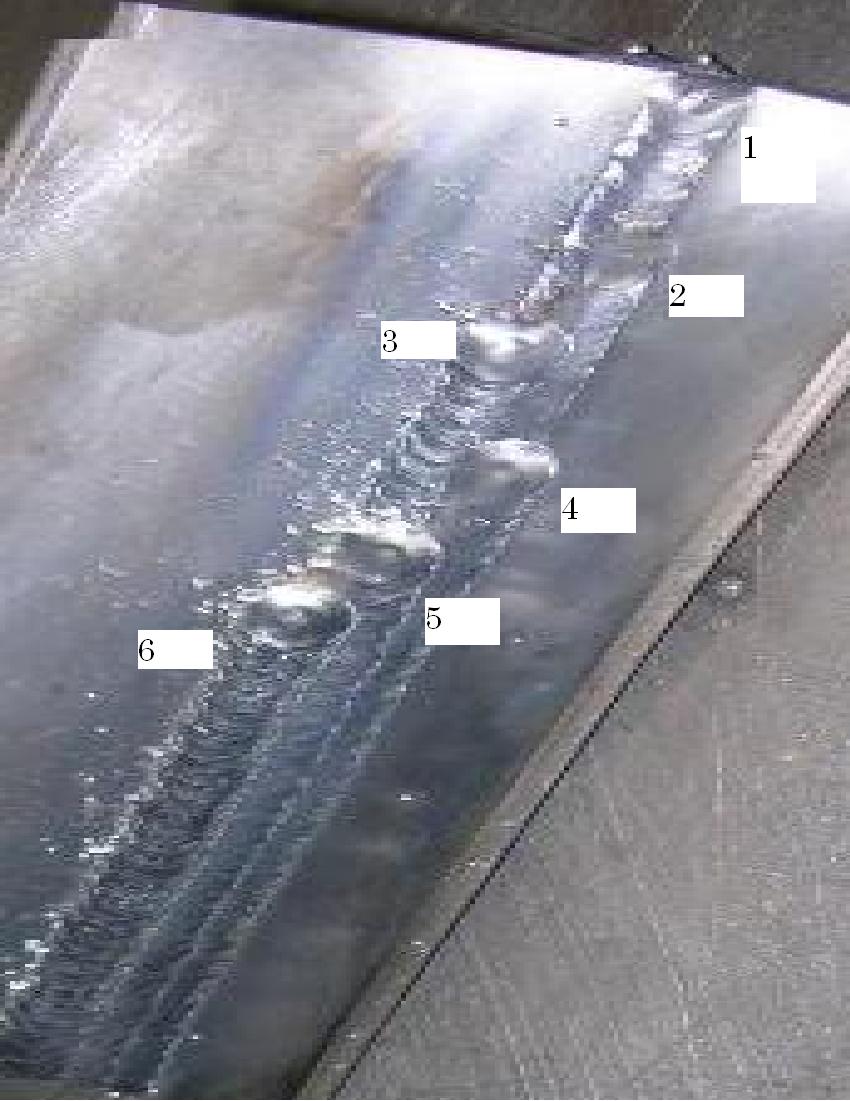 Date 02-10-2011 21:58
Going strictly by the definition and applying that definition to the photo as it is, yes all the others could be considered passes in a cascade sequence.

Date 02-10-2011 22:42
I apologize, my intent was not to imply a cascade.  I am asking if I was to start a bead at one end of the plate and with the intention of finishing at the other end but I stopped for example to gather more filler - would that be considered a pass and restarting my arc to finish to the other end would that be a separate pass?   Or if welding around a pipe and I only filled in 180 degrees and paused ground my stop and continued the remaining  half-   Would that be considered one pass or two. Please elaborate.

Date 02-10-2011 23:21
If it would be considered one pass isn't it still possibe for the weld to exceed interpass temp at my stopping point on certain metals or long increments?

Date 02-13-2011 11:01
Just before welding of the second layer, it must obviously be meassured a different place then where you meassure preheat.

AWS D1.1 does not specify the maximum interpass temperature on any carbon or high strength low alloy except for a couple listed in a footnote at the end of Table 3.2.

On a large weldment, it is entirely reasonable to expect the interpass temperature to fall below a minimum if the heat input is insufficient to compensate for the lost of heat due to conduction or the cooling effects of cold air (think winter in the northern climates). Supplementary heat may be required to maintain adequate interpass temperature. If the welder breaks the welding arc, has to clean, chip, or grind the weld crater, or if the welder breaks for coffee, lunch, or for any other reason, it can be expected that the interpass temperature would be checked before reinitiating the arc to verify it is above the minimum required by the welding standard.

Date 02-11-2011 14:08
After reading Al's post I realized as well that I was thinking in terms of interpass max. With interpass mins it is essentially the same argumentthough. You are trying to slow down cooling rate and if you happen to go below  prior to your measuring there is no damage to the material. Hydrogen evolution is time temp related and the hydrogen will still be moving and the cooling rate still slow.