Topic Welding Industry / Technical Discussions / How to determine the TKY connection as per AWS D1.1

Date 07-15-2013 13:46
John,
Thank you for the response.
Just trying to get my head around it - I realise tube to tube (or pipe to pipe) is harder but we have been welding pipe bracing to plate (flanges of UC or UB) on major mining machinery for years in the "T" or "K" configurations and I always thought those joints fell into the T,Y,K category.
Is that not the case ?
Cheers,
Shane

Ha...I know how you feel. Those typing ninjas beat me to the punch more often than not....LOL

A connection that is indirect, i.e., a tube to a plate such as that used as diagonal structural bracing in building construction has different design considerations. That is, the connection has an element (the plate) that acts as a hinge and provides some degree of movement, i.e., the plate can bend. This is not the case with tube to tube connections which has a high degree of restraint due to the inherent stiffness of the tubular members. The failure mode in a tube to tube connection is different because one or both of the members will fail by buckling, punching through the wall, tear out the wall of the main member, etc.

Ultimately it is the engineer's responsibility to consider the failure mode that is most likely and design accordingly.

A tube/pipe to plate connection such as that depicted in AWS D1.1 Detail B of figure 4.20 is nothing more than a fillet weld around a round member. The member used in fabrication could be a hollow structural shape or it could be solid, it makes no difference.  The connection could also be a CJP or a PJP groove detail which could be selected from any of the prequalified bevel or  J-groove details found in figure 3.3 or 3.4 for indeed, they are nothing more than Tee joints welded from one side with backing. Life becomes a little more complex if the designer specifies the groove detail as CJP without backing.

You can follow the thread that tie all of the tubulars together, but the bottom line is that the code has special provisions for tube to tube connections, for butt joints and then additional considerations for joints that make up tubular T, Y, and K connections where it is tube to tube with no connecting plates.

At least that is my understanding of the situation.

By quocbui Date 07-15-2013 16:38
Thank you for your clarification, I also agreed with you that when they mention to TKY tubular connnection which also knows that it is connection between tubular to tubular.
But AWS D1.1's Annex K Term and Definition still makes me confusion
Tubular Connection: A connection in the portion of a structure that contains two or more intersecting member, at least one of which is a tubular member.

No one works in a vacuum.

In clause 10.
“The specific requirements of Clause 1 0 apply only to tubular connections as defined in 10.3 and Clause 3 . Such connections may be butt joints between tubulars, T- , Y- , K- connections of tubulars to tubulars , or tubulars welded to flat plates or flat elements of other members . Where this clause refers to rectangular tubulars, square tubulars are included unless noted.
10.1 .1 The scope of the term “tubular members” includes:
(1 ) Circular hollow structural sections (HSS ) ;
(2) Rectangular HSS;
(3 ) Square HSS ;
(4) Fabricated members built from flat plates and or shapes joined together with CJP longitudinal seams acting as chord members designed us ing the provisions of Clause 1 0. For design purposes , this clause shall be used with the applicable requirements of Clause 4, Part A. All provisions of Clause 1 0 apply to both static and cyclic applications, with the exception that the fatigue provisions of 1 0.2.3 , only apply to cyclic applications”.

Does it mean 18” pipe welded to plate CJP is considered TKY connections now? If the project contract was signed in 2019 before this, do I need to follow this new requirement? 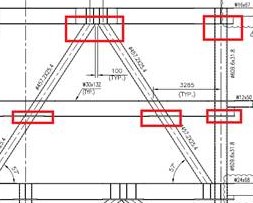 You would not apply the requirements of AWS D1.1:2020 unless there was an agreement between the Engineer (representing the Owner) and the contractor to use the latest edition when construction starts. As mentioned, once the contracts are signed, the code editions in force on that day are "locked". I have seen exceptions while working on nuclear facilities and upgrades were mandated by the NRC, but that's an oddball.

From your description of the situation, you would be required to meet the requirements of edition of D1.1 referenced by the applicable building code or possibly D1.1:2015 if the Engineer references that particular code edition. If there is a question regarding what edition applied, ask the Engineer for clarification. No reputable Engineer is going to be offended by anyone asking for clarification.

I suggest you look at Table 4.1 in D1.1:2015 with regards to the diameter of the HSS. If you are welding a round HSS, a procedure on plate is acceptable on a round HSS if it is at least 24-inches in diameter. It would not be valid for square or rectangular HSS. Table 9.9 lists the positions used to qualify the WPS and the production positions qualified when the procedure is qualified using a HSS.

The diameter you cited is not qualified if plate was used for the purpose of qualifying the WPS, even in the 2015 edition of D1.1.

I hope this helps.

There are specific tests in D1.1 for qualifying the WPS and welder. In the case of qualifying the WPS,  the butt joint is to demonstrate the procedure will meet the mechanical properties listed by the code. You may have to suppliment that with macro etch samples for the square and rectangular HSS whether they are hot formed or fabricated from plate.

I decided to qualify 6GR welders for tube to plate connection shown in figure.

Thanks for your info.

Date 08-26-2019 18:54 Edited 08-26-2019 19:18
Hi Al,
I am having trouble interpreting whether or not i need to reqaulify my guys for an upcoming project. Everyone in the shop is certified 2G-1/8" to unlimited under D1.1 and also D1.8 certified. For this upcoming project we have round HSS members ranging from 5" diameter .375" thickness all the way up to 16" diameter .625" thickness. There will be no tube to tube connections,we are only welding demand critical, CJP tube to plate T-Joint connections with backing in the flat position using pipe positioners to maintain the flat position. Now being that this is HSSR(round hss) and not rectangular HSS, will we be required to reqaulify all the welders since the diameter falls under 24"? The only thing making me question reqaulification is everything i'm seeing is for T,K,Y connections without backing. The weld we are going to perform is merely a CJP t-joint with backing. see attachment
Attachment: pipeCJP.PNG (33k)

Date 08-26-2019 20:07
Adam,
we havent qaulified yet. It's for an upcoming project. I am trying to see if i need to reqaulify or not. I dont see a test figure for a pipe to plate with backing.
thank you

Date 08-26-2019 20:49
If its called out as a CJP with Backer, then I would treat it as a T-Joint Connection CJP. Which would require testing on pipe in the 6GR position per Table 9.13. Use Table 9.14 for diameter and thickness sizing of your tests and Fig. 9.25 for the test joint configuration.

Date 08-26-2019 21:47
If the tube is rotated so the welding in in the flat position, I would test the welders using a butt joint on pipe in the positioner.

Date 08-27-2019 11:00
CWI-BRI,
Follow Als advice.
You didn't note what your welders originally qualified on but by your responses it seems to be plate - so, yes, you will need to re-qualify.
If all your work is going to be in the flat position on a positioner then that is where you should be testing your welders,
Cheers,
Shane

Topic Welding Industry / Technical Discussions / How to determine the TKY connection as per AWS D1.1