I see on the AWS D1.1 that for TKY tubular to tubular a Back-up Weld support is recommanded for Angle 15 to 75°.

On drawing it is never written back-up support.

How do I know I can tell to the customer that the root pass can be considered as support pass and should not be taken into accompt for Angle <75°? 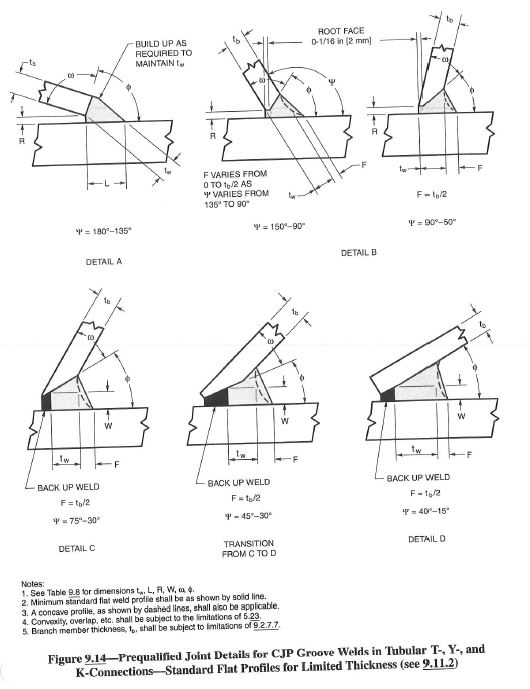 I'm with you Shane, "confused"

Shane, you are correct, this term or definition does not show up in AWS A3.0 Standard Welding Terms and Definitions.....and it should. We are always preached to about using proper terms and definitions to reduce confusion.

However, I just realized that this has been in D1.1 (in the Annexes) for quite a while...at least back to the 98 edition(that is the oldest version I have here at work to reference).

Date 12-10-2019 10:14
So, based on that I can bend some round bar or a welding rod around the circumference and that is doing exactly the same thing as a " back up weld"  ?
How can you have a supposed CJP that is not really a CJP ?
I know it is nothing to do with you Al, you are only trying to help - but I am completely lost on this one.

I can't speak for the committee and I don't serve on the committee. Having said that, I think there is the realization that the probability of getting sound weld deposited in the root of a joint with a small dihedral angle is wishful thinking. The probability of a sound root bead is about as probable as Trump telling the truth.

So, any backup weld deposit is simply ignored. Once the backup weld provides a surface (the face of the backup weld) that is wide enough, the access is improved and the probability of depositing sound metal increases.

Keep in mind there are structural joints that are typically subject to axial loads that are in compression or tension. They are not usually subject to internal pressure that develop hoops stresses like a pipe that is transmitting a pressurized fluid or bending stresses.

There are no provisions for wrapping a round bar around the joint to serve as backing in D1.1. That isn't to say the Engineer could authorize such a solution.