I was reading about different hydrogen failures on this site http://www.aws.org/w/a/wj/2004/01/still_feature/ and they mention a defect known as "Fisheyes". They also say to look at Figure 8 for an example, but there is no figure 8. Could someone please show me an example of this defect?

Date 09-10-2008 12:54
To me the description sounds like when you finish your weld and you do not fill enough. You end up with a small depression and a slight round hole (fisheye).

Fisheye
A discontinuity, attributed to the presence of hydrogen in the weld, observed on the fracture surface of a weld in steel ahat consists of a small pore or inclusion surrounded by an approximatly round, bright area.

please allow me to attach an appropriate picture to your explanation. 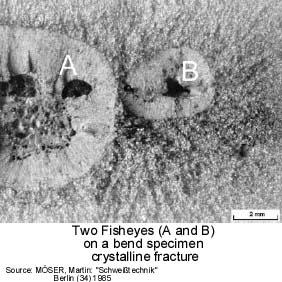 In the south this is a fisheye (sorry couldn't resist)

And here is one of our forum members looking a fish in the eye....LOL

This was before the specimen's tensile test? :-)

Great picture! Now I'm sure that David is perfectly happy!

Best to you,
Stephan

Attached are pic's of both species. The one on the left is walleye, and the other is northern pike.

Closely followed by sushi carved from a tuna still flopping on the deck while 50 miles out from Half Moon Bay!

To be honest I've never eaten a Northern... All catch and release.

Date 09-12-2008 17:02
I have not had the privledge of tuna as fresh as that. This is something I would love to try. I seem to recall something about the still beating heart being quite an experiance as well. :-)

if I would have been the lucky one who would have had this "sample" I wouldn't have resisted as well! :-):-):-)

Best to you!
Stephan

Lawrence,
Since you didn't have a picture....look below. Can you guess who that angler is?

To the original poster, I hope we didn't ruin your thread for you, just having some fun with Lawrence.

The angler or the fish?

with regard to even your statement, please let me add two more words on this interesting topic a bit more "seriously" (even though the biology of the Northern American fish species is fairly interesting as well).

The origination of fisheyes is quite interesting due to it is that specific.

Normally one can't determine the hydrogen being responsible for even the "fisheye appearance" until the deformation or the fracture has occurred. Thus one might ask: "Where is the fisheye appearance originated actually?". As one can see in the jpeg I had attached three days ago, there is a difference with the fracture appearance between the "plain" fracture surface (rather coarse), see again the attached and "modified" picture, and the adjacent area around the "crack initiators".

While the cracking was initiated from even those "darkened" areas (quasi the pupil of the fisheye) which were pores from a cold lap (Area "A" in the picture) the hydrogen which was absorbed atomically prior to cracking is being actually "pumped" proportionally with the movement of dislocations along the {110} gliding planes. Finally the whole action results in an accumulation of dislocations saturated with molecular hydrogen. The fracture of those hydrogen saturated areas is even more "fine grained" and thus different to those areas which are showing a "regular" fracture surface appearance.

This however, just as a short addendum... 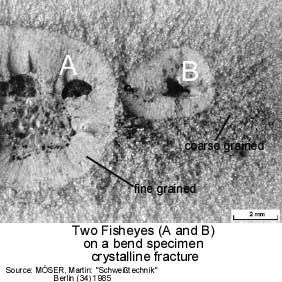 Thank you, that is exactly what I've been trying to find. Also to everyone else, even thought pictures of fish were off topic, it was still nice for a laugh. :)

Date 09-10-2008 16:59
David, I looked in vain last night for a picture of a fisheye.
I agree with the previous descriptions.
From a welders view the fisheye is when you are tig welding and you pull your tungsten out to terminate the arc. It leaves a divot (shaped like a fisheye) if not done correctly.

Check out this thread, it has very informative information on it about hydrogen porosity and how to fix it.  I even have a few pictures of fish eyes/hydrogen porosity in a couple of my tensile pull pictures in this thread.  Hope this helps!! http://www.aws.org/cgi-bin/mwf/topic_show.pl?pid=96382;hl=aluminum%20porosity

By CECW7611 Date 10-03-2008 01:32 Edited 10-13-2008 13:41
A fisheye is a recognition that hydrogen will exist in welds made using cellulosic coated electrodes because they are designed to weld with a small moisture content. The hydrogen will diffuse into the molten weld metal during welding. During nick break testing, depending on how the load is applied, this hydrogen will migrate along grain boundaries and collect just before the specimen breaks. The appearance of the indication is usually circular and grainey, grey with typically a black or darker dot in the center of it, basically centered the circular area. Almost exactly like a fisheye, thus the name. This indication is allowed in the API 1104 Standard. But sometimes, to the inexperienced, the round nature of this indication is interpreted as porosity and the nick break would fail due to misinterpretation. Sometimes, there may be several fisheyes in one nickbreak depending on the thickness of the material.

Several years ago Lincoln Welding did have an excellent bulletin concerning fisheyes and had an excellent picture. I don't know if this is still available though.

I did look at the photos above and they really indicate shrinkage in the weld puddle, the puddle cooling from the outside toward the middle. This may appear as a crater crack if left in the root bead and radiographed (again API 1104). Sometimes it may also be interpreted as hollow bead or linear porosity.

i have just faced a problem concerning fish eye defect, how can we distinguish porosity and fish eye defect from each other,in the other words what are the main differences between them? is it possible to say a defect is fish eye without unaided eye?

You can visibly see (unaided eye) fish eye, but this is after you fracture the part/sample.  You will see the dark spot surrounded by shiny bright area.

If you fracture a part/sample with just porosity, you will just see round voids.  The area around it is uniform and unchanged.

Thanks for the explanation.

That was something I didn't understand before.