Date 09-01-2009 16:11
I'm doing a project and the person wanted it done in an octagon. I've laid it out on my cad software and know my outside length. Doing the math and wanting to double check myself. I'm thinking that I need to cut 22.5 degree angles on all the pieces correct?? Looking at it though I guess I could cut off four pieces at 90* and four with 45* angles on both ends and get the same result. Geometry was not my strong point but doing this stuff now it's an interesting challenge. Think I got it figured out but would like to confirm before I go cutting up a bunch of steel. Thanks!

Date 09-01-2009 18:37
If you have enough space, mark a pattern on the floor that's known to be perfectly square so you can line each piece up and tack it in place. Since you're useing round stock it will be hard to keep the angle on one end parallel with the angle on the other. One slight twist and the cut will be off. The pattern will allow you to fine tune the little inconsistencies and fill the gaps with your weld.

Date 09-02-2009 00:54 Edited 09-02-2009 01:26
Clamp a short chunk of small channel to the pipe, the pipe should only touch on the two sides or legs inside of the channel.  Then take a magnetic level and stick it on the channel.  With the level on the top so that the axis of the work piece is reading level make one 22.5 Deg. cut on the end with your chop saw.  DO NOT REMOVE THE CHUNK OF CHANNEL.  Flip the piece end for end and with the chunk of channel and level now on the bottom so the axis is reading level make your second cut on the other end.  Now you have two cuts that are indexed to each other perfectly.  Continue with the remaining seven pieces and fourteen cuts.  Post picture when done then cash check and smile!

Cool. the main thing is you gave her what she wanted....LOL 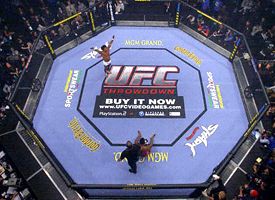 Date 09-02-2009 11:54
Thanks for the info on that. I've been explaining it to my wife, she's pretty slick with the math and she does not know where us "welders" are coming up with 22.5 degrees. There must be a formula or something right? What if I want to do a hectagon next time?! LoL!! Guess I should have paid attention in school during the whole geometry part!

In order to end up with the correct angles so that the tube joints fit properly, one must cut 22.5 degrees of scrap tubing off from the presumed 90 degree end of each tube... Leaving one with each end of the tube having a 67.5 degree angle which would then give one a 135 degree included angle once both members of the joint are fitted together... Therefore facilitating the proper joint angle to mate the joints accordingly to meet the main objective of achieving a true octagonal base shape - PLAIN and SIMPLE!!! ;) Btw, this was already mentioned with a different selection or words the more than one explanation but, I thought it was appropriate to simplify the explanation somewhat! ;) ;) ;)

The only question I have is how one could come up with a 22.5 degree angle represented & labeled in the "o.jpg" when it is clearly much larger in size visually without even measuring it??? :)

Date 09-03-2009 14:32
I thought about it while driving yesterday and figured it out, well in my brain. I'm not cutting it at 22.5 I'm taking away 22.5 from 90 to give me 67.5 as Henry pointed out. I explained it over the phone to my wife and she came to me when I got in the door last night at 10:30. She had it laid out on graph paper(octagon) and had the pipe outside ring. She said if she extended one of the pipe pieces past the angle(22.5) and made it a 90 then it showed the 22.5 angle. More or less working with a right triangle. Interesting bit of schooling for both of us yesterday. Thanks for all the help and information.......education!!