CJP in a T-Joint is possible.

What does the print say and what code are you welding to?

Call it a Tee Joint

Call it a groove weld if it is CJP

To answer the OP's question

In many cases, yes it can be done.   However there are factors involving material type and purpose that may have some effect on determining and qualifying. 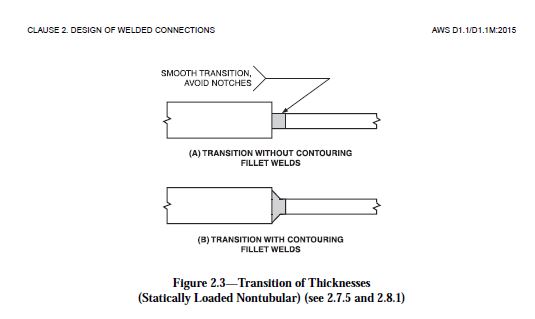 I was thinking along the lines of AWS TC-U4a configuration.

which would then be welded with a:

Also, AWS considers a 'butt weld' as a nonstandard term (per A3.0) for a weld in a butt joint.

But I agree Butt Joint, Tee Joint, Lap Joint, Etc then Fillet weld or Groove weld either CJP or PJP

Date 10-09-2019 18:32
Might be a "non-standard" term in AWS but standard in other codes as mentioned in earlier post. Not a hill to die on though. Just wanted to challenge your thinking a little.

Date 10-10-2019 15:03
Understood. I appreciate the enlightenment. As I mentioned, we were always corrected in Trade School and at several shops I worked at, Butt Joint with a groove weld.

I will have to refrain from stating its non-existence as to not upset the natives.

Date 10-09-2019 12:46
If the 64mm material is the one receiving the bevel, you should consider the probability of Lamellar Tearing.

For a butt weld joining two members having
different thicknesses at the weld, t is the thinner of these
two thicknesses. If a full penetration weld includes a fillet
weld, the thickness of the throat of the fillet shall be included
in t .

5.5 WELDING OF TEST JOINTS-BUTT WELDS
To weld the test joint for butt welds, two pipe nipples
shall be joined, following all the details of the procedure
specification. 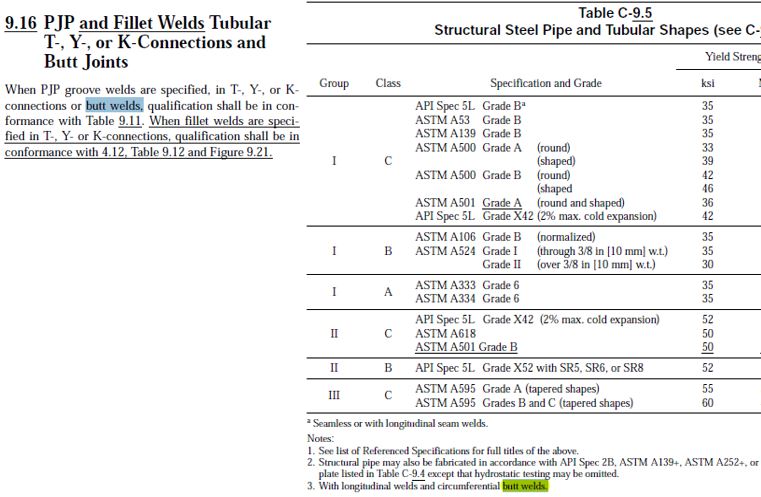 I am amazed at the lengths to find evidence that I mis-spoke. Clearly there is a mountain of it showing the existence of butt welds. And yet, it isn't even relevant to the OP's post considering it was a Tee Joint with a groove weld.

I don’t even think you misspoke :)

Totally not meaning to give you a hard time at all.

D1 misspoke according to its own style guide, and that’s what I was pointing out.

Date 10-10-2019 19:24
Sorry Steelslinger, not trying to get under your skin. Like I said in my earlier post. Not hill to die on, but wanted to enlighten you a little. My point is that it is a standard term used by a number of other codes and standards. I guess when you corrected the OP'er we tried to bring some clarity. No offence intended.

And I do appreciate the enlightenment on it.

Sometimes I need to heed the little hesitation at hitting Post on a snarky response.

By Shivarama Date 10-15-2019 04:38
In response to Mr.Shane Feder response, I would like to clarify that, it is NOT two different thicknesses. The material is round solid wire (Eg-8.5 mm), would like to butt weld the two ends of the different wires of same diameters. Pls note that, material is SAE 9254 (Chrome-Silicon alloy steel)

In this regard, do you think forming grooves between two wire ends will be best idea for better welding.

Also, after welding, how to maintain the hardness on lower side, presently it is increasing, which causes brittle fracture during wire drawing for further diameter reduction.

Thank you,
With regards,
Shivaram

Date 10-15-2019 11:55
Shivarama,
I never replied to your post.
Either you have hijacked someone else's post or there is a "glitch" in the system on your post,
Cheers,
Shane

Example; How often do we hear the term "weld puddle" used? It was recently included in a "guide" that I reviewed and I didn't notice it until it was published! Damn, it got by me. Goes to prove we aren't infallible.

Just because it appears in a standard doesn’t mean it is a proper or standard term.

Date 10-12-2019 10:51
Steelslinger,
I meant no offense by my post.
Purely supporting JH in his response that it is used in many other codes/standards.
My good mate Al gets very cranky when non-standard terms get into the conversation but we all need to consider the bigger picture.
Yes, it is an AWS forum and " Butt Weld" may be a non-standard term.
However this forum is used by people all over the world and that should be taken in to consideration.
I have previously worked with ASME, AWS, API, AS (Australian), JIS (Japanese),ISO (European), BS (British) and GBT (Chinese) codes/standards and the chances of the terminology of all those codes/standards aligning is less than zero.
Cheers,
Shane

Date 10-12-2019 11:00
OK,
Refer to the OP's original question - totally inappropriate question.
The OP should not be asking how to weld a major structural joint on an internet forum.
Tim Garys response regarding lamellar tearing explains a part of my concerns but where are the experienced / knowledgeable / qualified people who should be telling the OP what he can and cannot do ?
Cheers,
Shane

? I agree that it isn't a hill to die on. I was just poking the bear with a sharp stick!